Bob Garfield declares victory against Comcast from his ComcastMustDie shock & awe. What, so he installed Verizon?

No, he points to stories in the Times and Post about the new Comcast attitude and praises Comcast for having…

…institutionalized the practice of listening, in live forums around the country but especially on the internet, to resolve individual problems and learn about the (many, gaping) holes in its customer-service operations.

Does this solve the biggest part of their structural problems? No, not by a long shot. They acquired cable systems too fast and have been inexcusably slow in building network-wide infrastructures for installation, repair and the most rudimentary customer-relations management. In short, they still totally suck. (As Comcast quality czar Rick Germano euphemistically frames the situation, “There’s a lot of upside for us.”) But they are investing a lot of money to build those very structures, and have turned a corner in corporate culture.

Glad he pointed that out. The only real solution to bad customer-service and public-relations problem is to have a great product and service. No — no — cable company is there yet because I argue that they are still built around telling us what we cannot do (no, you can’t watch what you’ve bought whenever and wherever and on whatever you want; no, you can’t just plug in your expensive and sophisticated TV but you have to put this clunky, stupid box inbetween you and the world of possible entertainment and information; no, you can’t host anything to the world because we don’t think you’re creative; no, you can’t download that much; no, you can’t upload that much; no, you don’t have a life and so you have to wait all day for the cable guy). Cable companies are still built on fucking us. But at least now they’re grinning while they do it.

Nonetheless, give credit where it is due: Comcast has made a number of important changes in its relationship with its now-empowered customers and, like Dell, it has benefitted as a result. They also vow to take a next step and within a year play host to a ComcastMustDie on their own. But why wait a year? In the spirit of cooperation, I’ll suggest that they can do it now with GetSatisfaction.com — which they apparently are using, with Comcast employees interacting there — and with an equivalent of MyStarbucksIdea and Dell IdeaStorm — where people can make real suggestions.

In any case, the cause of vendor relations management marches on.

Dell, Starbucks, and the marketplace of ideas

Just as I was researching a column for the Guardian on Starbucks’ MyStarbucksIdea and Dell’s IdeaStorm — both of which use Salesforce.com’s Ideas platform — I got an email from Business Week asking me to write about Starbucks. So here’s a twofer: my Guardian column about this new platform for customers to share ideas (and my wish that it would come to government) and the Business Week story about Starbucks.

Here are some added quotes from my interviews.

Marc Benioff, CEO of Salesforce.com on the platform:

* On the genesis of Ideas: “We started using the technology ourselves to talk to our community about what they wanted from salesforce. We called the site ideas.salesforce.com, and we noticed right away that this was a powerful way for us to connect with our community and to make sure that we were delivering the right services and features at the right time. Our product managers have to deliver highly-ranked features and work with Ideas if they are going to succeed in our company. It’s like a live focus group that never closes. I love it and look at it all the time. After using it for a while, we decided this had to be part of our portfolio, so we acquired the assets of the company that built it (called Crispy News), and the employees work at salesforce now.”

* On whether this is really new. “I believe that these days, the rapid communication that is enabled by wikis, blogs, Twitter, YouTube and you name it ensures that no matter what kind of company you are, your customers are having a conversation about your products and practices. The question that every company has to ask is: ‘Do I want to be part of this conversation? Do I want to learn from it? Am I willing to innovate on the basis of it?’ If you harness the power of this community, you will benefit. If you turn your back on it, you get further and further out of touch while competitors flourish. So yes, I think this is a new kind of communication for a new age of customer engagement.

The dead-end suggestion box and the auto reply are symbols of corporate indifference and are no longer tolerated. Customers expect a higher level of responsiveness now, and they will go where they find it. We learned this when we were pioneering Software as a Service. We had to stay connected with our customers or they would not continue their subscriptions. We needed to hear their ideas, or we would miss out on their creativity. And most important, they needed to talk to each other. Dell and Starbucks are pioneers in understanding this.

* On response to Dell’s IdeaStorm: “…But the response was mind-blowing. To be honest, Michael and I were both surprised at both the volume and the content. It was absolutely fascinating to watch, and for Dell, it has opened a new chapter for a terrific brand. Michael was kind enough to share his experience with Howard Schultz at Starbucks, and then we helped them build mystarbucksidea.com

* What about government starting ideastorms? “That is simply a killer idea. We are in an election year of course, and I would like to see both parties use technology to better connect with the electorate. Salesforce Ideas is democracy, as the saying goes, red in tooth and claw. But you have to invest in a conversation–it’s not going to work unless there’s a real back-and-forth.” 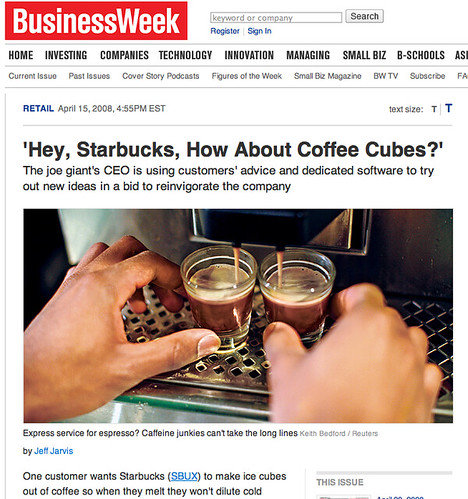 From Chris Bruzzo, CTO and CIO of Starbucks and the leader of the MyStarbucksIdea project:

* On customers’ relationship with Starbucks: “Anybody who works for Starbucks… it’s this universal experence that people open up this to-do list that’s in their head. THey have very specific, detailed ideas. That’s a phenomenon. All these ingredients were in place. Howard [Schultz, the returning CEO] said to me we have to reconnect with customers and drive our company, Starbucks, as an entity to having a ‘seeing culture.'”

* On this platform: “Our goals were to collect ideas and to understand which ideas have the most momentum and passion in our customer base
But it was also to open up a dialogue with customers and build up this muscle inside our company in having a give-and-take conversation with our customers. As compelling as the ideas themselves are, it’s almost as compelling to us from an objective standpoint to be able to have this kind of running dialogue with our customers: to close that loop in an authentic way and show the commitment on the part of Starbucks to responding to what we’ve heard, which is about putting those ideas in action or building those ideas together with customers and coming to a new place.”

* On integrating it with the company: “We were not going to simply have this be an opportunity for customers to share perspectives. We were truly going to adopt it into our business process — into product development and experience development and store design. In order to do that, I thought it was critically important to have real experts form the teams that were building our experience selected on the basis of their characteristic and trained to not only have the conversation but the advocacy for what customers were saying via this new channel. So that literally customers would have a seat at the table when product decisons are being made. They have champions inside the company that are advocating for that.”

* They launched it that the annual meeting, where 6,000 people showed up and started sharing their ideas. There’s still some debate whether people should be able to vote down, as well as up, the ideas. For now, Bruzzo says, “it’s a happy place.”

* After I saw one of the “idea partners” say there were things Starbucks was working on in secret related to the Starbucks card, I pushed Bruzzo on really being open. He said: “Onee of the things we have to worry about is IP and competitiveness. We will invest significantly to make enhancements to the Starbucks card platform, for example. We want a head start.” But he acknowledged the issue. “This is an evolution. The community is evolving and so is Starbucks. We’re going to have to rethink when we would disclose broadly about a particular strategy because we have a vested community. There are advantages to having that kind of transparency because it creates more engagement… and we actually get to iterate on our solutions while we’re building them. What we do wit the Starbucks card is likely to be a different process than it would have been without this community. I think it is changing and evolving our views of confidentiality and competitiveness.”

* Surprises? “That coffee classes perked up as much as it did. That shows a level of interest in coffee expertise that some of us were surprised at.”

* What about ideas that don’t work? Some customers are pushing for separate lines for brewed coffee (that is, faster lines without all the froo-froos). “The idea partner is in there saying we actually tried this here and there and these are some of the things we ran into. What do you guys think of that… If it fails our customers who are on MyStarbucksIdea ought to participate in being accountable for it.”

* What’s next? RSS and the ability to track an idea’s progress.

* Advice to other companies: “Don’t underinvest in adopting it into your business process. Take it seriously. See it as an important part of how you run your business…. Go for it. The perfect is the enemy of the good. Don’t attempt to perfect it. Learn. Iterate. Your community is incredibly forgiving actually if you show a real interest to listen and respond.”