Germany, what have you done?

Street View is online in Germany and it includes — or rather, excludes — 244,000 addresses that Germans have demanded be pixelated. They have, in their word, demanded their Verpixelungsrecht.

It is more offensive than I had imagined, a desecration of the public demanded and abetted by German politicians and media on a supposed privacy frenzy. 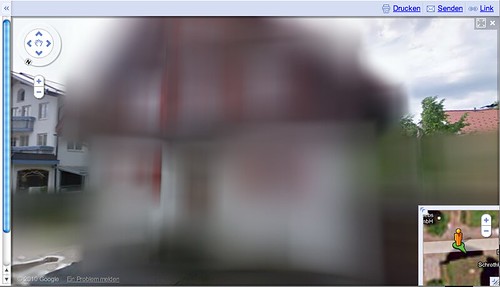 Ugly, isn’t it? As someone in the audience said when I spoke on the topic at a meeting of the Green party in Berlin a few weeks ago, it is as if they are digitally bombing the German landscape.

Now you can drive to Oberstaufen and stand across the street — between the Edele bookstore and Dr. Fassnacht’s building — and look at the building all you want because you would be exercising your right to be in public. But not online, not in the land of Deutschnet, you can’t. Germany has now diminished the public. It has stolen from the public.

This is not a matter of privacy. And don’t tell me it has a damned thing to do with the Nazis and Stasi; that’s patently absurd. If anything, the Stasi would have exercised their Verpixelungsrecht to obscure their buildings from public view, taking advantage of the cloak of secrecy the idea provides. That’s the danger of this.

This is an issue of publicness. These are public visions now obscured. This is why I am writing a book about protecting the public, from assaults such as this. I can’t write it fast enough.

MORE: Here’s Der Spiegel (in German) under the headline: So Google pixelates the Republic. Don’t blame Google, folks, blame yourselves. It notes that the mayor of Oberstaufen, however, welcomed Street View. With a cake.

: UND AUF DEUTSCH: Zeit Online translated a version of this post — a message to Germany — into German, guaranteeing that the next time I visit Germany, I’ll get hit over the head with a mass of cameras. If you care, I’ve pasted the English original after the break.