Here is video of the talk I gave at re:publica 2010 in Berlin on The German Paradox: Privacy, publicness, and penises. (Don’t be frightened by the first moments in German; it’s just an introduction and a joke — with fire extinguisher — about how I had threatened to Hendrix my iPad on the stage in Berlin.)

My subject is all the more relevant given this week’s letter to Google with privacy czars in a handful of countries trying to argue that Google Streetview taking pictures in public violates privacy. In my talk, I argue that what is public belongs to us, the public, and efforts to reduce what’s public steals from us. Journalists should be particularly protective of what is public; so should we all. (The czars also argued, amazingly, that Google shouldn’t release betas. They come, you see, from an old world of centralized control — and the myth that processes can be turned into products, finished, complete, even perfect — instead of the new world of openness and collaboration.)

With so much discussion — even panic — about privacy today, I fear that we risk losing the benefits of publicness, of the connections enabled by the internet and our interconnected world. If we shift to a default of private, we lose much and I argue that we should weigh that choice when we decide what to put behind a wall — and there are too many walls being build today. But we’re not discussing the benefits of the public vs. the private. I want to spark that discussion.

I use Germany as a laboratory and illustration of the topic not only because I was there but because they have something nearing a cultural obsession on the topic of privacy. What’s true there is true elsewhere, including the U.S., though only to a different level. I also only skim the surface of the topic in this video; there is so much more to talk about: how publicness benefits the ways we can and now must do business; how it affects government; how it alters education; how it changes our relationships; how young people bring a new culture that cuts across all national boundaries and expectations; how it multiplies our knowledge; how it creates value; how it leads to a new set of ethics; and much more. But that’s for another time and medium.

In the talk, this all leads up to the Bill of Rights in Cyberspace, which is really about openness and protecting that.

At the end of my time on stage, I invited the room to continue the discussion next door in the sauna, Four guys did show up. Here’s the proof.

If you prefer, here is are my slides with the audio of my talk and discussion, thanks to Slideshare: 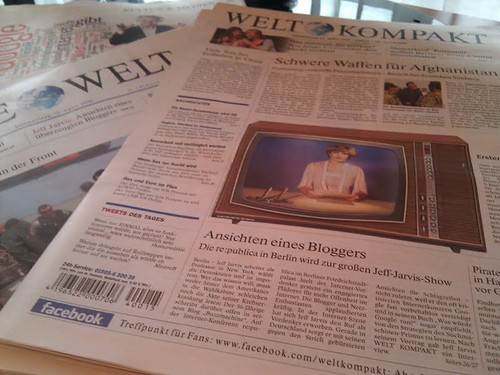 And here is a slice of an illustration of my talk by AnnalenaSchiller.com (who tweeted beforehand about having to draw a penis for the first time in her talk-illustration career) that appeared in the German paper Der Freitag this week: 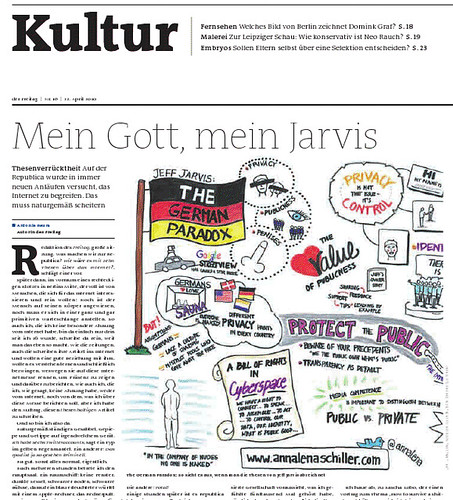 Yet more: Here’s an interview with dctp.tv in Berlin that summarizes my views:

: LATER: Penelope Trunk, who lives in public, writes: ” The value of your privacy is very little in the age of transparency and authenticity. Privacy is almost always a way of hiding things that don’t need hiding.. . . And transparency trumps privacy every time. So put your ideas in social media, not email.”

: AND: I just got a message on Facebook from the woman I talk about in the Sauna in Davos, the one I said was an American freaked by the mixed, nude crowd of sweaty Russians and me. She thought it was quite funny … especially because she’s French (living in America).