Here’s another free excerpt from Public Parts — a day before its formal release in print, e-book, and audio tomorrow. This audio excerpt comes after the earlier piece about the Germans and privacy and it’s about my own publicness and privacy. Warning: penis ahead.

One more free excerpt — the introduction — is here.

What Would Google Do? – in paperback

After almost three years, What Would Google Do? is out in paperback. Oh, no, now I have two things to hawk. It comes with a new afterword. A snippet from that (with rules from the book highlighted): 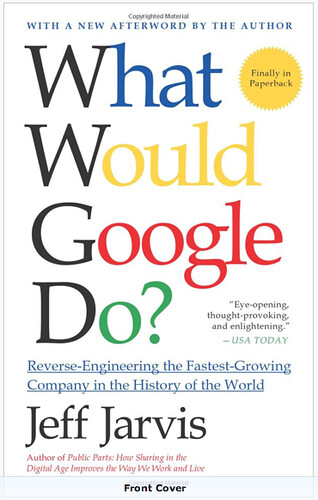 The best part of writing What Would Google Do? came after it was published, when people from a surprising range of sectors shared with me how they had tested the rules you’ve just read in their own endeavors.

I spoke with a convention of truck-stop owners who realized that their way stations could act as nodes to build networks among drivers who have information to share with each other. Join a network. Be a platform. Think distributed.

At the other end of the demographic spectrum, I heard from executives at two of the largest luxury-goods companies in the world, who saw value in opening up even their exclusive design processes so they could build direct relationships with new tastemakers and new talent and become curators of quality and luxury. Elegant organization.

At another extreme, I heard foundations speculate about how different their work would be if they opened up their structures to identify new needs, new grantees to meet those needs, new ways to measure their success, and new ways to leverage their assets by encouraging others to help in their work. Join the open-source, gift economy.

At a meeting of librarians, we faced their worst case—closing libraries—and then catalogued the value they will still add when information and search are digital but human expertise and guidance aren’t. Atoms are a drag.

A group of postal executives wondered what Google would do if it ran the Post Office. One official speculated that it would give every American a computer and printer, replacing mail and slashing cost. This discussion led to a conference in Washington called PostalVision 2020, where I pushed the industry not to try to fix the Postal Service a cutback at a time but to bravely consider what the market would and could do on its own. Beware the cash cow in the coal mine. Do what you do best and link to the rest. Get out of the way.

At the height of the financial crisis, I moderated a session at Davos in which entrepreneurs speculated about how to fix the broken banking industry. They imagined creating the bank that is open about all its data, from investments to salaries. Be honest. Be transparent. Don’t be evil.

Lufthansa ran a brainstorming session with a score of social-media practitioners at the DLD Conference in Munich, wondering how even an airline could be Googley. The bottom line: Customers want airlines to share information with them (why is the plane late?) and then they will be willing to share information back if airlines make good use of it (for example, assigning me the exact seat I like best). There is an inverse relationship between control and trust.

Best Buy’s tweeting chief marketing officer, Barry Judge (@BestBuyCMO), had me come to the company’s headquarters to try out some of the ideas here. I learned more from them than they did from me as I witnessed a smart company that is trying to move past just selling things in boxes to providing service and expertise. Best Buy opened up its infrastructure to allow others to build stores atop it. It has 3,000 sales people answering customers’ questions through a single Twitter account (@Twelpforce), turning them into the “human search engine.” It also is becoming a media company, selling promotional opportunities in stores. Decide what business you’re in.

Sales guru and author Jeffrey Gitomer invited me visit his staff to help them decide how they could be Googlier. I suggested they start by gathering the best sales tips from their own readers, who are out there selling and succeeding every day. Gitomer himself blogs and tweets and that inspired his new book, Social BOOM!, about this new way to do business together. Trust the people. Your customers are your ad agency.

In my next book, Public Parts, I also tell the story of a very Googley car company Local Motors, which designs cars openly. Collaborate. I also report on visionaries who are rethinking retail from the ground up, now that Google and the net make pricing transparent. Google commodifies everything. Welcome to the Google economy.

Most fun of all, I have heard of church pastors who aspire to be Googley, leaving their brick walls behind to go to where the parishioners live, using the web as a tool. Church Magazine suggests a “move from giving answers to asking questions.” Listen. Trust the people. Everybody needs Googlejuice.

These church folks did not fall for the joke in the title of this book. Google isn’t God and these laws here are not immutable. “We don’t consider Jarvis’s rules to be sacred or unchanging,” Leisa Anslinger and Daniel S. Mulhall wrote in the magazine, “but they do provide a valuable tool to help us rethink how we are to be a church in the twenty-first century.”

It is with some considerable relief that I read What Would Google Do? today and find that its gospel still stands. But then, as I said at the beginning, this is not really a book about Google but about the changes overtaking our world. Those changes only prove to be more disruptive—and more important to understand—by the day.

Here’s another free excerpt from Public Parts, this one about the Germans and privacy. Here is the text (click on the link directly below or on the full-screen button in the app to read at a civilized size):

Here, friends, is the introduction to my new book, Public Parts: How Sharing in the Digital Age Improves the Way we Work and Live, complete and free. It’s a summary of the thinking in the book.

The excerpt is in Scribd because that maintains the formatting and pretty typography. (Click on the full-screen button at the bottom of the player to blow it up, or click on the link atop to go to the Scribd page.)

Also, below, is the audio version of the intro — with me at the mic, oft-edited.

I’d be remiss if I didn’t tell you that you can go here for links to preorder the book, which is released on Sept. 27. And here is the schedule for the book tour, as it stands.

Here’s the audio excerpt. (If it’s not showing up, try this link; the embed has been a bit wonky for me.) By the way, audiobook fans, you can’t preorder the audio version — oddly — but it will be on sale promptly on Sept. 27.

Let me know what you think. I know you will…..

“Privacy has its advocates. Jeff Jarvis has made himself an advocate for publicness. In Public Parts: How Sharing in the Digital Age Improves the Way we Work and Live, the original Internet optimist argues that if we become too obsessed with guarding all personal information on the ‘Net, we’ll miss important opportunities that come with making information available.

“It’s a refreshing take on a topic often covered by people who feel that the Internet — and in particular, social networks like Facebook and the vast amount of personal data that flow within them — threatens to imperil our children and undermine our society. . . . .

“His book is not so much a rallying cry for tweeting your breakfast choices and blogging your company financials as it is a field guide for how to navigate this new technology with optimism rather than fear.”