Alan Mutter, Boswell to the Grim Reaper of journalism – he has done a great job tracking the business misfortunes of the industry – produces a harrowing year-end account of newspaper company market value. His chart: 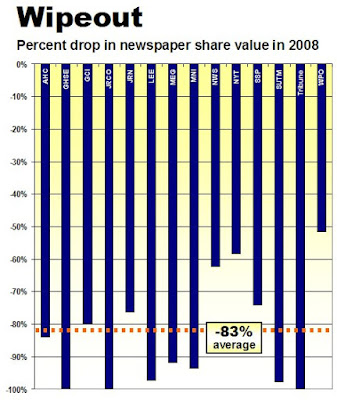 * Newspaper shares are down 83.3% in a year, erasing $64.5 billion in market value – more than double the drop in the S&P 500.
* “The shares of eight of the 14 publishers tracked in the survey fell by 90% or more. The best-performing companies were the Washington Post Co., New York Times Co., and News Corp., but WaPo, the least battered issue of all, still fell 51.5%.”
* “The biggest loser of all was Tribune Co., which is worthless as the result of the bankruptcy filed less than 12 months after Sam Zell bought its shares for $8.2 billion to take the company private.”
* “Trading for pennies, the shares of GateHouse Media, Journal Register Co. Lee Enterprises and Sun-Times Media Group are essentially worthless.” McClatchy may be headed for delisting soon.

It is fair to surmise that newspaper stocks last year got trounced twice as badly as the broader market , because investors have not seen any plausible strategies from publishers to reverse the accelerating declines in readership, advertising and profitability that have been under way since 2006.