Thanks to a blog

I’ve just had a magnificent week-plus in London thanks to the hospitality of many Londoners — and this blog. Without Buzzmachine — and my mentions here and on Facebook that I would be over there — I wouldn’t have done any of this:

First, I wouldn’t be writing and consulting for the Guardian, which I unabashedly admire, and wouldn’t have gone there to work with them. I also wouldn’t be consulting for Sky.com, which is turning out to be fascinating. At both places, I met with no end of smart innovators.

I wouldn’t have had one of the great dinner conversations in memory with Tom Loosemore, ex of the BBC and now reinventing the future of media at OFCOM, the British regulator; Tom Coates, also ex BBC who’s already reinvented bits of media and is trying to keep doing it at Yahoo; and Paula le Dieu, also ex BBC (this is a theme for the week) and a leader in Creative Commons and now an exec at a leading digital agency in London. It was worth the trip to see Paula squeal like a schoolgirl at the wonders of the One Laptop Per Child machine Tom No. 2 brought along. (I can’t wait to get my hands on an OLPC; one of its great educational features is how it makes its code transparent to children.)

I wouldn’t have had an incredible day in Cambridge, thanks to Bill Thompson, who has his fingers in many media pies and has many smart friends, some of whom came along for lunch and then a wander around the town: John Naughton, who among many things is also a media columnist, at the Observer and who is starting a neat new company with Quentin Stafford-Fraser; Rex Hughes, who just got his Cambridge PhD; Rufus Pollock of the Open Knowledge Foundation; David Good; and a leader at the Open University who had to leave earlier. I was having such fun in the conversation that I didn’t want to tour Cambridge but the tour with the group only extended the talk and the fun on a beautiful fall afternoon. I wish my kids could go to school here. I certainly wouldn’t have been invited to the home of Seamus McCauley, a strategic exec at Associated Northcliffe Digital, and his wife, who held a bonfire party to watch the fireworks behind their yard (Guy Fawkes day, you know) and there I got to meet Simon Cast, who is better-read in blogs that most anyone I’ve met.

I wouldn’t have been invited by Robin Hamman to join a blog event at the BBC, where neat things happened.

Wouldn’t have gone with Robin and others to a Yahoo dinner, where interesting things also happened.

Wouldn’t have had drinks and dinner with Kevin Anderson, ex BBC and now Guardian, and his blogging mate Suw Charman plus two of their friends, ex BBC both, and by sheer chance Neil McIntosh and his wife and brother, Ewan, who I’ve been wanting to meet in reality and not just in Facebook and who just happened to be waiting for a table at the same restaurant (small town, London).

Wouldn’t have finally met and had a Saturday lunch with Martin Stabe, the killer media blogger at the Press Gazette.

Wouldn’t have had lunch one day and coffee another with Paul Brannan, deputy editor of BBC.

Wouldn’t have meet Katie King, ex Reuters and now a Burston exec; we got to talk about the Nieman Foundation and the future of journalism.

Wouldn’t have had breakfast with Edward Roussel, head of digital at the Telegraph, and seen what they’re up to in video.

Wouldn’t have caught up with Tom Shelley of the Economist Red Stripe project over breakfast.

And I wouldn’t have met Ivan Fallon, CEO of the Independent in London, and Mark Labovitch, head of digital, and heard about their strategy.

Oh, and by the way, I can’t resist pointing out where I met the guys from the liberal Independent: 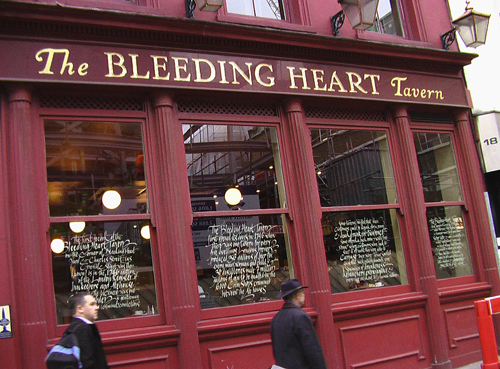 I wouldn’t made all these friends and had all these great conversations and benefitted from their hospitality and I also wouldn’t have had this work. None of this would have been possible if I didn’t have this blog (and Facebook, too). Is blogging worth it? Well, yeah.