What Would Google Do?

My book, What Would Google Do?, will be released by Collins Business, a division of HarperCollins, on January 27, 2009.

The idea: I try to reverse-engineer the success of the fastest growing company in the history of the world, the one company that truly understands how to succeed in the internet age, and then take those lessons and apply them to a number of industries, companies, and institutions, from carmakers to restaurants to universities to government.

You can buy What Would Google Do? from Amazon

When I start making author appearances, I’ll put up a link to the schedule here. The discussion continues on posts on the blog (here are posts tagged WWGD) and at the book’s Facebook page. Oh, and you can buy WWGD t-shirts, mugs, and bags here. And I’ll post WWGD: The PowerPoint soon. 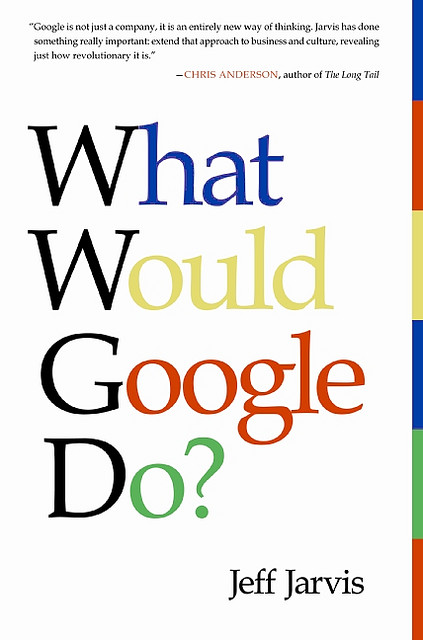 “What Would Google Do? is an exceptional book that captures the massive changes the internet is effecting in our culture, in marketing, and in advertising.”
— CRAIG NEWMARK, FOUNDER OF CRAIGSLIST

“Jeff Jarvis has written an indispensable guide to the business logic of the networked era, because he sees the opportunities in giving the people control, and understands the risks in letting your competitors get there first.”
— CLAY SHIRKY, AUTHOR OF HERE COMES EVERYBODY

“Jeff Jarvis’s What Would Google Do? is a divining rod for anyone looking for ways to hit real paydirt in the new territory of Web 2.0 marketing. Jarvis has a sharp eye for what is relevant, real, and actionable. Isn’t that what we all need today?”
— MARC BENIOFF, CHAIRMAN AND CEO, SALESFORCE.COM

“If you want to understand how the innovation around the New Web is the anithesis of the dot-com period, read this book. It’ll open your eyes to a ton of real possibilities for your business in a new world.”
— Don Tapscott, coauthor of Wikinomics and Grown Up Digital

A bold and vital book that asks and answers the most urgent question of today: What Would Google Do?

In a book that’s one part prophecy, one part thought experiment, one part manifesto, and one part survival manual, internet impresario and blogging pioneer Jeff Jarvis reverse-engineers Google—the fastest-growing company in history—to discover forty clear and straightforward rules to manage and live by. At the same time, he illuminates the new worldview of the internet generation: how it challenges and destroys, but also opens up vast new opportunities. His findings are counterintuitive, imaginative, practical, and above all visionary, giving readers a glimpse of how everyone and everything—from corporations to governments, nations to individuals—must evolve in the Google era.

Along the way, he looks under the hood of a car designed by its drivers, ponders a worldwide university where the students design their curriculum, envisions an airline fueled by a social network, imagines the open-source restaurant, and examines a series of industries and institutions that will soon benefit from this book’s central question.

The result is an astonishing, mind-opening book that, in the end, is not about Google. It’s about you.

* Fortune names What Would Google Do? one of the three best web books of 2008: “…the book offers a great overview of what all businesses across nearly every industry have learned about the way the Web changes what they do.”

* USA Today: “Blogger/columnist Jeff Jarvis’ treatise on how — and why — companies should think and act like Google brings to mind several trite words from the world of literary criticism: eye-opening, thought-provoking and enlightening. There’s something for everyone in What Would Google Do? For newbies still struggling to comprehend the Internet, Jarvis puts it in context. For floundering industries, Jarvis suggests reforms via Google’s philosophy or strategies employed by entities such as Facebook and About.com. And for people and groups hoping to launch the next big Google, Jarvis takes a page from Craigslist’s Craig Newmark: Make something useful, help people use it and then get out of the way.

* CIO Insight magazine lists WWGD? among its 15 must-read books for IT pros.

* Booklist: “Jarvis offers thought-provoking observations and valuable examples for individuals and businesses seeking to fully participate in our Internet culture and maximize the opportunities it offers.”

* Gregg Morris: “Jarvis not only “gets it” he “explains it”. As very few have been able to do. And he does that not just for those “in the know” he does it for the average Joe as well. If you are having trouble coming to grips with the new world order, Google and the niche economy, and what it means to you as an individual, a business or an organization I would encourage you to get to Amazon’s site or down to your closest Barnes and Noble and get a copy as quickly as you can. And if you are one of the gazillion people out of work right now you might want to get there quicker.”

* The Bookmark at the U blog: “The scariest chapter for me, was when Jarvis re-imagined the book publishing and selling business. I work in a bookstore. I write books. As an author, you write books and hope people like your words enough to pay for them. As a bookseller, you help people find authors that appeal to them so that they will buy the books from your bookstore. What if my livelihood were suddenly changed by an influx of free books on the Internet, or offering only ebooks. Is this such a bad thing, Jarvis asks. I began the chapter by screaming “Yes.” I ended the chapter by realizing that the Internet actually helps my business, both in writing and selling books.”

* RIchard Pachter doesn’t like Google but still concludes: “On the whole, What Would Google Do is more of a ”What can I do?” exercise. Jeff Jarvis may not be quite as omniscient as he imagines, but his bold thinking and prodigious faith results in a rollicking sermon on reinvention and reinvigoration.”

* Fred Wilson, AVC: “It’s a good read, perfect for a flight. It’s not too dense, full of great quotes and insights. I’m enjoying it.”

* The LA Times: “…Jarvis is a canny writer, and an entertaining one. The tone that drives his popular blog, Buzzmachine, has arrived intact on the bound page. The arguments are cleanly delivered; the prose is crisp and alive. More important, Jarvis never stumbles when it comes to the big picture. It’s not technology that powers the Internet, he writes — it’s people and the connections they make.”

A video the publisher made for booksellers (it’s a bit too caffeinated even for my taste; they ordered anyway):

Here’s a Flip video (HD) I made for the V-book (that is, an E-book + video) at Ditchley outside Oxford, UK:

Videos from a conversation with Bob Miller, head of Harper Studio: