Tom Watson, the blogging and tweeting Member of Parliament, passes along, via Twitter, a job posting for a director of digital engagement in the U.K. government. Specs include:

You will have a small budget, but two key purposes of the job are to assist Government in making effective use of current digital spend, which runs into many millions, and to enable departments to save significant sums on their engagement activities through switching from expensive face to face and postal methods to cheaper digital techniques. You will be accountable for leading Government’s new focus on digital engagement, which is central to Government priorities and with significant risk of reputational damage if this does not happen or Government gets it wrong. . . .

You will be required to exercise influence across departments with Ministers and senior officials to drive forward the future of digital engagement. This will require Government and individual departments to change the way they do business – from consulting citizens to collaborating with them on the development of policy and how public services are delivered to them. It will involve supporting Ministers and senior officials in entering conversations in which Government does not control the message or the dialogue. . . .

The Guardian’s Comment is Free asked me to write a post about the new White House blog. I’m about to get on a plane so I’m crossposting it here before that link goes up…..

Two years ago, when I interviewed the then-head of David Cameron’s Webcameron, I asked whether—when and if he assumed office as Prime Minister—he would continue making his videos. “If it suddenly stopped,” the aide replied, “that would be seen as a very cynical move . . . You can’t stop communicating.”

Now that Barack Obama is in the White House, he must continue to use and spread the tools of the internet and transparency that he so brilliantly plied to win the office or else it would make his promises of change empty.

We see the barest beginnings of his digital administration at the White House Blog. (Ah, how that link warms the heart of a blogger. Too bad that the president and vice-president of Iran beat the president of the birthplace of blogging to the platform. Oh, well, progress is progress.)

Dave Winer, one of the fathers of blogging, complained on Twitter and his blog that the presidential blog is weak tea. But I think 24 hours is too soon to judge a revolution.

The presidential blogmaster, Macon Phillips, promises communication, transparency, and participation and we’ll see how well he and his boss live up to their broad goals. Before taking office, they asked the public to suggest policy and action at Change.gov–as Starbucks and Dell do (it’s all the rage)–but, sadly, they took that down when they took office and linked instead to the new blog, where we can watch and read his inaugural address.

A new age of government openness, and collaboration with the citizenry won’t be made on one blog or Twitter or RSS feed or YouTube stage. It will be made by issuing and instilling a new ethic of transparency in government.

I argue that we should abolish the Freedom of Information Act and instead make transparency the default for government’s business, which should occur digitally and in the open, so citizens may search, link, comment on, and analyze it. Rather than our asking the government to release our information, the government should ask our permission not to.

And the President should also instill an ethic of listening in the agencies of his administration. Some collaboration may occur at the White House site. But the real voice of the people is already out here, on the internet, in blogs, on YouTube, all around us. All you have to do is search for it and listen. That will be a new age in government.

Barack Obama says we have only one president at a time. That, apparently, is why Gail Collins and Tom Friedman want the old one to leave office now, which is silly if understandable wishful thinking.

What we need instead is, indeed, two presidents. And we’re beginning to get that. Barack Obama is revealing his path and is taking action. The fact that the stock market can reach orgasm just on his naming a Treasury secretary – and not a particular superstar at that (see Andrew Ross Sorkin’s leavening of the exuberance today) – shows how much he’s already in charge and how welcome that is. The more Obama acts presidential, the better off we will be.

I have been impressed with Obama post-election. He has been moving to the center, where I am glad to see him. He has been unafraid to work with strong characters from the Clinton administration, including his rival. He was unafraid to reach out with a peace offering to the left’s boogeyman, Joseph Lieberman. He has been decisive in showing leadership on the economic crisis – and the more he acts the part of the president in power, the better. In the small arenas I watch – the FCC and the web – had has made extremely savvy moves.

My fear about Obama during the campaign, often stated, was that I hadn’t seen enough of him and thus worried he’d be a Jimmy Carter. Now my fear is the opposite: that so much hope is invested in him, he will disappoint his most devoted followers as he necessarily opens wide the tent and compromises to accomplish. But he’s not disappointing me. He’s giving me, uh, hope.

I don’t have a lot to say in this but some folks have asked why I’ve been silent since the election. It’s because I didn’t have much of anything to say – see, I can say that – and I was watching. In answer to those folks: I like what I see so far, very much. Damned glad I voted for him.

The failure of listening

We’ve just played the highest stake game of guess-the-number: The market was thinking of a number and the government was supposed to guess it. Lehman folding? Bzzzt. That’s not the number. Bailout of money market funds? Bzzzt. Think higher. $700 billion to buy toxic loans? Bzzzt. Wrong again. Buying equity in banks? Ding-ding-ding, you win!

Why wasn’t the government better at listening to the market? Did it ever ask what it should do?

That’s not the way government thinks. But it’s the way it should learn to think. There need to be systems to listen and expectations that we out here should speak. In a representative democracy, government doesn’t always need to act on what it hears. But now it can’t hear.

Government and regulation will need to be transparent and interactive in this, the Google economy.

When your organizers organize you

Ari Melber happens upon what could be an important moment in the history-in-the-making of participatory, self-organized online politics: Barack Obama supporters used his own network to organize a protest against his actions on telecom immunity. 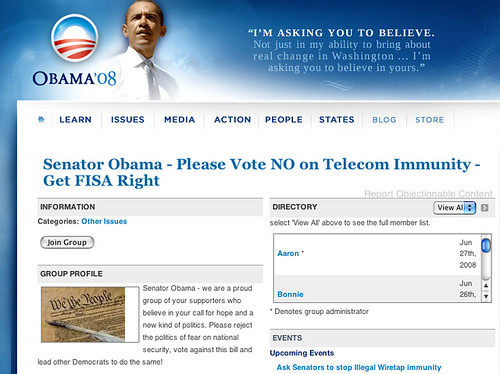 Now if a campaign is going to argue that it’s truly grassroots, what is it to do with a revolt or protest from within? I’ve argued since Howard Dean’s run in 2004 that campaigns aren’t or can’t really be bottom-up when it comes to policy. They are necessarily propagandistic: This is what the candidate says. Indeed, Dean’s supporters acted like white blood cells in his blog discussions quite effectively surrounding and strangling dissent and opponents in the bloodstream. That’s the way campaigns have to work if you’re going to decide what this guy stands for and whether to vote for him, right? It’s about the message, no?

Ah, but when it’s a grassroots organization that makes you — rather than a party — and you say you’re beholden to them not to special interests and big money and lobbyists, well, then you really are beholden to them. If they rise up from within to tell you that they don’t like what you’re doing — when they use your own organizational tools to do that — then I’d say you ignore them at your peril. Live by the crowd, die by the crowd.

It so happens that I agree with Obama on this issue (and I know my view is as unpopular as his). When government forces you do to something then that force must come with immunity. The problem is not the telcos going along but the government making the demand and there being no check on that. But that’s a different debate.

I have disagreed with other things Obama has done since getting the nomination. I am profoundly disappointed in him for his decision to turn down government campaign financing. He stood on expediency not principle. I also find tragic irony in the fact that the best reason to vote for him is to turn around the Supreme Court before it is too late (if it isn’t already) and yet Obama endorsed just the kind of decision I dread coming from a right-wing court: last week’s ruling on handgun bans. So should I go into MyBarackObama and try to organize pressure groups from within who agree with me? Should I encourage my fellow Hillary Clinton supporters — now that we’re all unified — to do likewise to try to get him to promise truly universal health coverage? Why not? In the open organization, what’s yours is mine.

I find two things fascinating about this: First, we are beginning to see a campaign built openly on coalitions. Even though I disagree with them, I am happy to see the anti-immunity lobby crack the monolithic, glassy-eyed facade of the Obama fan club (the sort of people who yell at me in my comments and tell me I’m not allowed to disagree with him about anything). Thank goodness we see disagreement and discussion — democracy — inside a campaign. I believe the greatest impact the internet will have on politics will be that it enables like-minded groups to find each other and organize apart from old organizations and labels (red, blue, Republican, Democrat); we will organize around issues and priorities rather than parties. See the comments under this post.

Second, I wonder what these self-organizing groups will look like when they get into power. The Deaniacs and Joe Trippi made valiant attempts to stay organized after their campaign melted but that didn’t work. If Obama gets into the White House, though, will his supporters at MyBarackObama continue to use these tools to influence him and government? And will he have to listen because he is beholden to them?