After tonight’s world premiere of Harold and Kumar Escape from Guantanamo Bay, a woman in the audience asked why they involved George Bush. Someone else in the audience answered for the stars and creators on stage:

Thank goodness we haven’t lost our sense of humor about even him. 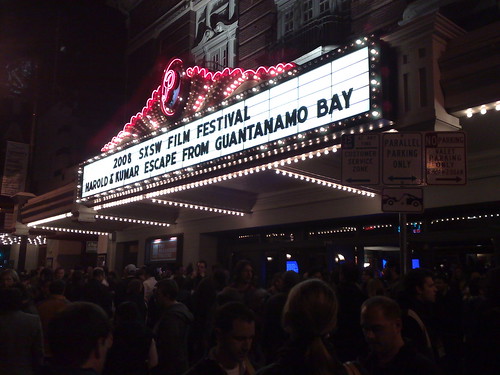 I liked the movie. It always helps to watch in a premiere audience, where they’ll applaud even the gaffer’s credit. But the thing’s funny and the political overtones aren’t heavy-handed.

Oh, I’m feeling so old right now watching a TimeLife commercial for a (shockingly overpriced) collection of FlowerPower songs from the ’60s with your infomercial host: Peter Fonda. Ouch. It’s not just that he has fallen to this fate but that my demographic has. Born to be wild, my ass.

Joan Rivers is back covering the red carpet, but this time for her own site: Emmys with Joan. It starts Sunday at 5p. Who needs a network when you have a blog? She and Melissa will be home live-blogging, live-vlogging, and all that, giving us the alternate soundtrack the awards show scene needs. No holds barred, my friend Fred Graver promises. She’s already blogging and its’ funny:

Hello, my darlings! Joan Rivers here, blogging for the first time in my short adult life.

I know what you’re thinking. “Why is Joan Rivers blogging?” Good question. My doctor told me blogging was what happened after eating too many bananas. But blogging is so much more — it’s sitting alone in a dark room, eating raw cookie dough out of the package while my dogs lick my bare feet, and wondering where my life has gone. Melissa, my daughter, love her to death, but the bitch never calls unless I threaten to update my will.

I may – may – be on Today this morning. They came to my house last night to record the interview but I suspect the segment may get bumped by the bridge disaster (my last network appearances were bumped by the execution of Saddam Hussein and the death of Anna Nicole Smith…. I am the news fairy; if you want a big story to break, just interview and preempt me). The topic on Today: Nan Talese saying that Oprah Winfrey shangaiied James Frey into his public flogging and blasting her “sanctimoniousness.” They needed someone who dared to criticize Oprah and found me. I remind them that it was Oprah who sleazed up daytime TV — in a straight line leading to Jerry Springer — before she recanted and declared herself the queen of all good.

: LATER: Sure enough, I got bumped.

Cutting the ties that bind

I haven’t worn a tie in months, maybe even a year. It may have something to do with my partial unemployment and attempts to act heretical when I have to go to church, but even while still an executive, I all but stopped wearing them. A suit with a shirt became my uniform: my Conde Nast protective coloration, a friend said. I’m ready to throw them out and I’m wondering whether it’s possible that at long last, the tie is out.

It has always been an utterly useless part of the male wardrobe. But now, it seems to me, the only people who wear the things daily are male politicians, the male reporters who interview them – and dodgy estate agents. . . .

The main reason we remain trussed up is simply the dead hand of convention. House of Commons rules say that men must not appear open-necked. But then the rules also say there are no liars in the House.

Increasingly, ties are simply bits of cloth which we hang around our necks when getting married, attending a funeral, or when called for a job interview.

This made for a proper hubbub in the Telegraph:

However, the attack on ties has left its defenders distinctly hot under the collar.

Dylan Jones, the editor of GQ magazine, said: “The fact that fewer men wear ties makes the wearing of them even more important.

Nicholas Worth, the manager of the Jermyn Street tailors Hawes and Curtis, said: “Ties are selling very well. In fact, we are selling more than we used to.

“People don’t like open necks or dress down days. I think men of a certain age, like Jeremy Paxman or Jeremy Clarkson, think not wearing ties or wearing jeans is cool. It’s not, it’s just sad.”

Off with the yoke. Damn the tie.

But then again, when my mother saw my appearance on Reliable Sources (above) her only comments was that I was the one guy who was not wearing a tie.