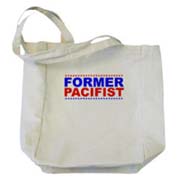 The post-9/11 T-shirts I’m seeing on the streets of New York are mostly mawkish, hawkish, tacky, or even offensive. We need to improve the level of T-shirt discourse. And here is my humble contribution: The Warlog Store (all profits to charity). So far, three products:

– The Rudy For… t-shirt. On the front, suggestions for Rudy’s next job: Attorney General (my crusade), FBI Director, Senator, Governor, any of the above. On the back, “Rudy Kicks…” with an arrow pointing you-know-where. Buy here.

– And to show off my new hawkish tendancies: A T-shirt that says “Osama: Kiss My…” with an arrow pointing down; the same message on front and back. Buy here.

Through others’ eyes: In the current issue of der Spiegel, there’s one story about the love-hate relationship Germans have with America right now — with many against supporting our war. And only a few pages away there’s a story (neither of them online) remembering the day exactly 40 years ago when our tanks confronted Soviet tanks across the Berlin Wall, risking nuclear war, a historian now believes, for the sake of German freedom. Ungrateful? Disloyal? At the same time, we’re hearing more about the planning for terror that occurred in Germany. Spiegel has a story about Atta plotting in Hamburg. And there’s an amazing story (if I’m translating correctly) about the double life of a soccer star turned terrorist. There are terrorists in their midst, too.

– The future of mail: Wall Street Journal asks whether this is the end of snail mail. I was telling friends the business to be in is sanitizing and opening mail for important or self-important people; too late, for the NY Times reports that Hazmail is offering just that. Will we be required to seal our mail in plastic bags? Will our mail be delayed while it’s nuked? Will the mail cost more? You bet. Will that affect every business that sells and communicates via the mail? Absolutely. Will they try to find alternatives in email? They’re trying.

– Do NOT microwave your mail.

– Blair: No Court TV for bin Laden. Rumsfeld: Ditto. Rumsfeld: On the other hand.

– Bild via CBS: Atta got anthrax from Iraq

Yesterday afternoon, I went down

Yesterday afternoon, I went down to the Here Is New York gallery — where hundreds and hundreds of photos of Sept. 11 are displayed on the walls and now there are so many they even hang from the ceiling. You’ve probably seen the story on TV: These volunteers are collecting photos from any photographers and then selling them for $25 each with net proceeds going to a WTC fund of the Children’s Aid Society. I bought five. No, I don’t intend to hang them in my living room; I intend just to hang onto them to remember. I don’t know why, but I find myself staring at photos like these. Even though I was there, I don’t think I’ve yet calculated the enormity of this; maybe that’s why I need to stare. These photos do not have the newsy urgency and bluntness of the amazing collection of photojournalism at Digital Journalist. These are mostly photos taking by the photographers who happened to be there. If you’re in New York, I recommend going to the gallery at 116 Prince St. (11a-6p); they’re open until Nov. 4 and they’re looking for donations to help build a web site to bring the photos online. Volunteers?

– Maureen Dowd: “The federal government is starting to remind me of the Amity town council in ‘Jaws.’ Afraid panic will spread and business will suffer, they keep telling us to go back into the ocean before they’ve figured out how to fight the shark. And people keep dying.”

– American Muslims meet; set up Muslim defense fund. Maybe they should think about excommunicating a few of their own.

Six weeks after…. I grew

Six weeks after…. I grew up watching the Vietnam War over dinner — when we were allowed to see the blood and the fear, not just green blobs on a nightvision screen — and that’s one reason I declared myself a pacifist at an early age. It was easy then. It was a cause. Vietnam was an unjust and just stupid war; I hadn’t seen a just war in my lifetime. Back then, when I announced my pacifism as only a dogmatic kid can, adults would, of course, challenge me with Hitler and I’d blather my way around it. But now we post-World-War-II children are facing our Hitler in Bin Laden and his cult of killers. We are facing the urgent need to end an evil before it attacks anew. We are in a just war that I know we must win not for justice or even revenge but for protection. We have not seen war on our land before and we have not seen war like this, a war without even the rules of war and certainly without the rules God or Allah, take your pick. This is a war of hate and there is no rational way to fight that. We have only one response: to protect our children, to fight and win. So I look up today, after the mass murder at the World Trade Center, after the start of biowar on our shores, after the start of an epoch of fear, and I realize that I am a former pacifist.

I hope the item above amounts to something more than this, but still I note this line from Andrew Sullivan today: “A reader points out that it is now a commonplace notion that a conservative is a liberal who has been mugged. Well, America has been mugged.

– Netzeitung — the very cool online-only newspaper in Berlin, does a story on this the warlog trend: this one, Matt Welch’s and others.

– Why the stars are meaningless: Shannon Elizabeth on Access Hollywood just now: She has gas masks. She’s looking for gas masks for her dog! She has an escape plan to Wyoming. Osoma doesn’t give a damn if he hits you, honey.

– None of the Post Office’s hints to find poison pen letters would have caught the anthrax letters actually sent.

– Just what the world needs: Al Sharpton on a mission to Israel.

– Times of London on Osama and nukes. Islamic fatwa on nukes: “…in case these nuclear weapons are used against Muslims, it becomes permissible for Muslims to defend themselves using the same weapon.”

– Future jobs for Rudy. Nobody’s picking up my cause — Rudy for Attorney General! I’m making the T-shirts now.

– Why I gave up hard news and became a critic a columnist, tv critic, and overall fluff monger years ago: “Thirty journalists reported to be held hostage by Afghans”

New name — Warlog: World War III … Cheney on this war: “It may never end — at least, not in our lifetime.”

– Another appropriately edgy Maureen Dowd column: “Many government officials here do not yet have a grip on an enemy etched in disappearing ink. Washington is rife with contradictory signals. The White House urges us to go out while Dick Cheney is under wraps. Congress urges us to stay calm and go about our business while the entire House takes a powder at the first sign of powder. We are supposed to shop till we drop, literally, as the F.B.I. and C.I.A. warn of major attacks at any moment. The capital is the heart of confusion.”