Me and my Kindle

I was wrong about the Kindle. When I unboxed it two nights ago, I excitedly bought my own book to feel all cyber and tweeted about it. But the book wouldn’t show up. “Opening,” it said forever. Two hours went by and I called Amazon (which – new for them – made the phone number easy to find and answered it in a minute). The lady said the modem had to be fully charged. That made no sense; it would mean essentially that it would never work unless plugged in. But, fine, I waited for the green light. Still no book. Two hours more. I called Amazon again. The man said it must be a defective unit and he nicely said he’s ship a replacement (this is why I am happy I have Amazon stock). I chronicled my frustration on Twitter, and word passed around there.

The next day, I tried the Kindle in Manhattan and it worked fine. Two more tests verified that the problem was not the Kindle but Sprint, which was never great at home when I had a Sprint Treo but would at least work. Now, it took more than four hours to download a book and even going to a new store menu page takes minutes. I confessed my mistake on Twitter and shifted blame to the phone company. Sprint monitors Twitter – that’s the good news – but they might as well not, as the Sprint guy merely tried to sidestep responsibility, saying that there wasn’t a network outage (I didn’t say there was) and shifting blame back to Amazon: “Spoke 2 @Sprint Care, Retail. Kindle issues should go 2 Amazon customer care.” Amazon should learn to pick its partners more wisely in the future. And I need to learn to cram caveats into tweets when I have problems.

So now I have a Kindle that works in some places, not others – and not working at home may be a killer. This is why I wish it came with wi-fi, or at least the option (especially for when I travel overseas). I prefer my control of communications on my iPhone. But then the problem with the iPhone is also that it has to be connected; I’d like to download content – such as the New York Times – to it so I could read the paper on the train.

The iPhone and Kindle are a study in contrasts. The biggest is, of course, the business model: One may buy books on either, but current content on the iPhone will, in most cases, be ad-supported; on the Kindle, it is paid for by the reader. The iPhone UI, right down to its flowing scrolling on its touchscreen, is elegant and happy; the Kindle is klunky and irritating. The Kindle lets me download and read anywhere; I like that; the iPhone won’t let me download The New York Times to read on the subway and that’s too bad. The iPhone lets me control my communications better. The Kindle screen is larger, yes, but the iPhone isn’t that much smaller: 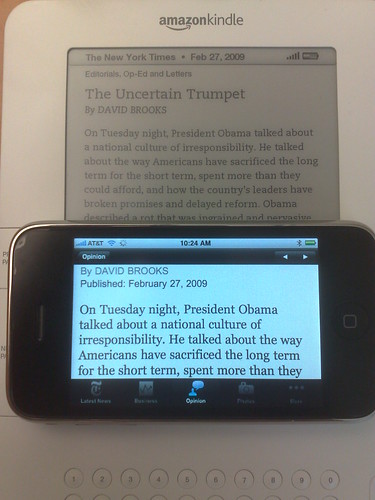 So I’m undecided about the Kindle. Its organization is still inelegant to say the least. For example, when reading the Times, it wants me to go story-by-story – that’s bookthink. I want to see the menu of articles in a section. But when I then go to an article and page through it, to get back to that section listing, I have to go back to the top and then back to the section. When reading a book on either device, I miss easy ways to thumb through.

If I traveled a great deal and took books with me everywhere – which I don’t – the Kindle would clearly be a godsend. And maybe it will make me start traveling with books – and reading them – more often, as the web has been bad for my book reading habits. But I’m still not sure.

I also wish that the business model of book publishing were different: that I could buy the contents of a book and get it in any and all media: I could read it on paper when I’m home and on Kindle when I’m on the road and listen to it on my iPhone when I’m driving. I disagree strongly with Roy Blount Jr.’s assertion on behalf of authors (other than me) that the Kindle shouldn’t be reading books aloud to readers because it would cannibalize audio-book sales. This assumes that people who buy the print book also buy the audiobook in great numbers and that having a book read by the computerized and irritating voice of a Kindle will hurt sales. No, I think a book should be sold as a package: buy access to the ideas and get them however you like. I think that would spur greater sales. The next step is to move past selling books as a product, frozen in time, and start selling them as a process. But that’s a post for another day.

I’m holding onto my Kindle for now. I was wrong about it at first blush and so I need to give it more of a chance.